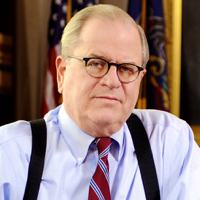 “It would be hard to imagine a more glaring judicial conflict of interest than the one the Supreme Court considered in a case out of Pennsylvania on Monday.

“In 1986, Terrance Williams was convicted of killing a man named Amos Norwood with a tire iron when he was 18. Prosecutors in the Philadelphia district attorney’s office sought the death penalty, and got it….

“A state court found that the prosecutors had lied, and vacated Mr. Williams’s sentence. But the Pennsylvania Supreme Court unanimously reversed that ruling. The court’s chief justice at the time, Ronald Castille, wrote a concurring opinion criticizing the lower court’s ruling for ‘condemning’ the prosecutors.

“The problem was that Mr. Castille himself led the district attorney’s office when it prosecuted Mr. Williams, and personally authorized seeking the death penalty in that case…. Nevertheless, he refused to recuse himself from Mr. Williams’s case….”

– From “Should a Judge Rule on His Own Case?” editorial in the New York Times (Feb. 29)

Meanwhile in North Carolina, prosecutors yet again show great interest in maintaining their conviction rate and little if any in ensuring justice has been done (text cache).