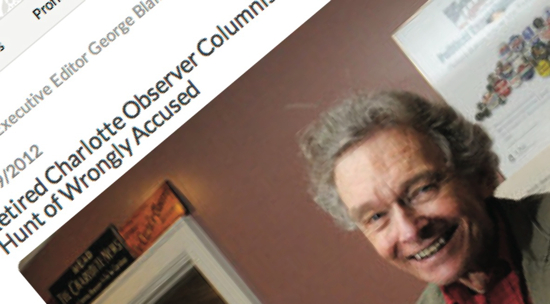 State’s Admission of Guilt in Witch Hunt of Wrongly Accused

After being laid-off from the Charlotte Observer after 34 years in 2009, Lew Powell took the news not as the end, but as a new beginning to explore with great vigor a single issue (a colossal miscarriage of justice in his view) that has consumed him since the 1990’s. It has also freed him to spend more time on his real passion: the unique history of the Tar Heel State.

Powell is exceptionally adept at unraveling the origins of symbols and traditions in North Carolina. His 34 years of newspaper experience at the Observer gives the North Carolina Miscellany a reliable voice with over three decades of institutional experience to draw from, as well as become the beneficiaries of a treasure chest of memorabilia. Powell has donated 2,698 North Carolina-related pin-back buttons, badges, ribbons, cloth swatches, promotional cards and stickers, which he collected over the years.

His unique grasp of North Carolina has resulted in books that can’t help but benefit residents of the Tar Heel State starved to discover a treasury of unique and largely unknown facts. Powell is author of the “Ultimate North Carolina Quiz Book’’, “On This Day in North Carolina’’ and “Lew Powell’s Carolina Follies’’ , a collection of 200 of his satirical year-in-review pages from The Charlotte Observer.

Despite his strong interest in North Carolina history, beginning about a year ago, Powell spends the bulk of his time researching and collecting facts on the Little Rascals Day Care Center, a facility located in Edenton, North Carolina, which had been owned by Betsy and Bob Kelly.

At the Center, Kelly was charged along with six others in 1989 with molesting 29 children attending the Little Rascals day care center. He was convicted in 1992 and sentenced to 12 life terms. Kathryn Dawn Wilson, a cook at the Center was found guilty in 1993. Both convictions, however, were overturned when the North Carolina Court of Appeals stated that there were “legal errors’’ by the prosecution. On May 23, 1997, all charges against were dismissed. Elizabeth Kelly and another defendant reached plea bargains in which they agreed to jail time served, according to reporting from The Associated Press.

The case caught the eye of Powell ever since the airing of the PBS special in which “Frontline“ producer Ofra Bikel profiled Edenton, N.C., a town in Chowan County, North Carolina (population 4,966) located in the state’s Inner Banks region. The 1991 report chronicled the way in which this small sleepy town was torn by allegations of child abuse at the Little Rascals Day-Care Center. In 1993, Frontline’s follow-up investigation raised serious questions about the evidence and the fairness of the trials. Between 1991 and 1997, “Frontline’’ devoted eight hours to the plight of the Edenton Seven, leaving many, perhaps millions, shocked at the way North Carolina so recklessly prosecuted the case.

Powell was so outraged by the case in which he insists innocent people were wrongly accused in what was nothing more than a witch hunt, has since started a blog, littlerascalsdaycarecase.org .

Powell said since October, he posts about three times a week, updating it with more information and relevant material. “Retirement has allowed me to reexamine details of the case,’’ Powell said, “to put it in the context of a decade of day-care ritual-abuse panic and to question those who invented and prosecuted the completely groundless charges.

“Most interesting to me has been the refusal of all the theoreticians and therapists behind the “moral panic” to acknowledge that “science and the law have completely discredited the interviewing techniques that led to Little Rascals,’’ Powell explained to me.

In this highly controversial case, which drew the attention of the national media, children testified they were forced to have sex with adults and each other at the day care center and other places. Tales of spaceships and trained sharks were also part of their testimony. The defense long argued the children were “coached’’ into telling manufactured stories that were more in tune with the parents “fears’’ than the reality of what actually happened.

Though the accused had their cases overturned, Powell is mainly irked that the state continues to claim they were guilty and refuses to acknowledge mistakes were made in their unsubstantiated prosecutorial methods.

One of Powell’s goals, however quixotic it may be, is to secure a statement of innocence from the State of North Carolina.

In a letter he wrote to Roy Cooper, North Carolina attorney general, Powell likens the case to the 2006 Duke Lacrosse scandal in which false charges of rape by three members of the team were made and led to the disbarment of lead prosecutor Mike Nifong. In his letter to the North Carolina Attorney General, Powell mentions the state granted the defendants a “statement of innocence.’’ Powell requested the state take similar action with those wrongly accused in the Little Rascal case.

In his letter, Powell writes: “For more than a decade, beginning in the 1980s, day care centers across the United States were victimized by a wave of wholly unsubstantiated charges of ‘ritual sexual abuse.’ The testimony of child-witnesses, corrupted by misguided therapists, resulted in dozens of convictions and incarcerations. The defendants were innocent victims of a ‘moral panic’ that bore striking similarities to the Salem witch hunts 300 years earlier.’’

Powell argues the case not only shattered innocent lives, “but also left a deep and ugly stain on the reputation of the State of North Carolina.’’

With Massachusetts Governor Jane Swift having signed a resolution in 2001, proclaiming the innocence of the victims of the Salem Witch Trials, why not, Powell asks, shouldn’t the same resolution be extended to the Edenton Seven?

“Exoneration for the Edenton Seven seems as distant a prospect as ever,’’ Powell tells me. Still, despite having the former district attorney slamming the phone in his ear, when he asked him if still believed they were guilty, Powell said he continues to pursue more leads, and still has stacked in his garage 11 unopened boxes of trial transcripts.

Before landing at the Observer in 1974 as a feature writer, Powell was a reporter and editor at the Jacksonville (Fla.) Journal, and the Delta Democrat-Times. He has additionally contributed articles to the Nation, Columbia Journalism Review, and The New York Times op-ed page.

It was at the Observer where Powell met his wife, Dannye Romine.

Born in the rural town of Helena, Arkansas, Powell grew up in a farming family in Mississippi, where he graduated from the University of Mississippi with a degree in accounting.

When he retired from the Observer in 2009, Powell was the paper’s Forum editor.