A children’s book not appropriate for children 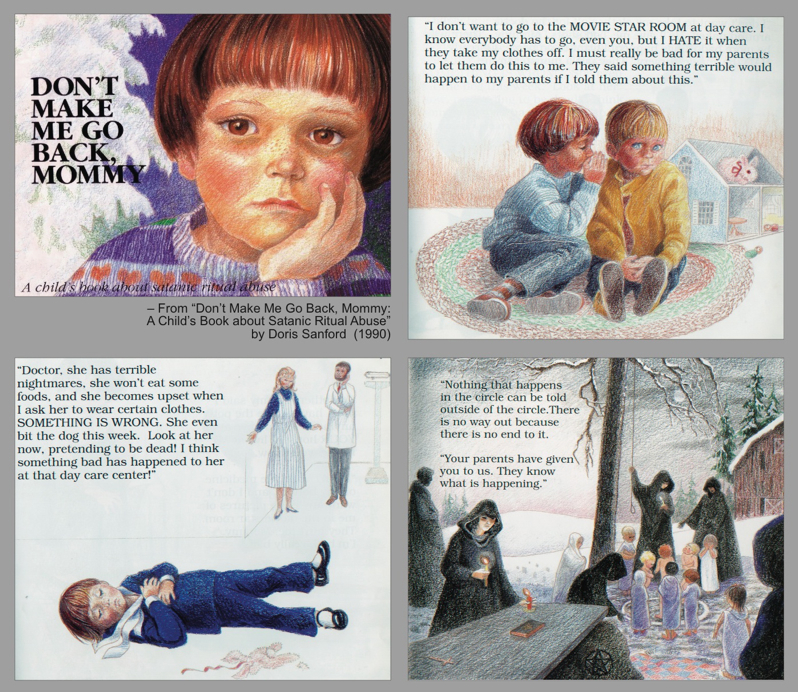 “When five-year-old Allison’s parents begin to see a change in her behavior at home, they seek professional help for her. They find that Allison and other children have been ritually abused at a day care center. Thus begins Allison’s recovery….”

Who knows how many lucky youngsters found this colorfully illustrated hardback under the Christmas tree? (More than 7,000 copies made it into print.)

Although Sanford credits herself with “months of intensive research into the nature and practice of satanic ritual abuse,” her dedication to “Patti Hills, Survivor…. We honor you, Patti! ” suggests she relied heavily on a Portland, Oregon, therapist “who claims to be… a witness to human sacrifice” (Willamette Week, Oct. 22, 1997). Also consulting: Lauren Stratford, author of the discredited baby-breeder memoir “Satan’s Underground.”

In 1993, “Don’t Make Me Go Back, Mommy” helped advance a notorious ritual-abuse case against a Spring Valley, Calif., child-care volunteer. The mother of one of Dale Akiki’s supposed victims admitted under cross-examination that she had read the book to her daughter, and it likely made the rounds of other parents. (After more than two years behind bars and a seven-month trial, Akiki was found not guilty of all charges.)

Eventually, however, “Don’t Make Me Go Back, Mommy” would become a target of appropriate (and sometimes hilarious) ridicule.