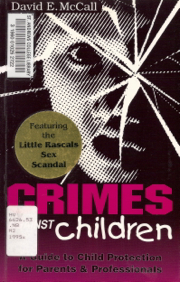 “On January 21, (Brenda) Toppin, Ms. Costin and Mr. McCall came to interview Kyle at his home. Ms. Stever prepared Kyle by telling him that he needed to be a ‘police helper’ to help figure out why the children at the day care were sad.”

“As an initial social services investigator in the Robert Kelly case, I believe justice was served with this verdict…. A Salem-style witch-hunt did not occur, and a perpetrator of crimes against children was justly convicted. A significant battle in the war against child sexual abuse was fought and won in Edenton….”

–From “Crimes Against Children: A Guide to Child Protection for Parents and Professionals featuring the Little Rascals Day Care Sex Scandal” by David E. McCall (1995)

I asked McCall if he still believes justice was served in Little Rascals. “I stand on my original substantiation of abuse by Robert Kelly,” he said. “I was not involved in the investigation of the others charged.”

He said he went into the case with “significant training” in investigating abuse, adding that “If you ever want a child interviewed to find the truth, I really feel like I’m pretty good at that.”