Whatever happened to Kelly’s ex-lawyer? This…. 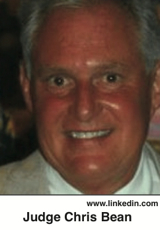 While we await Gov. McCrory’s decision on whether to promote Nancy Lamb to district attorney, another key figure in the Little Rascals prosecution is stepping aside.

From the Elizabeth City Daily Advance:

EDENTON – Judge Chris Bean, chief district court judge in the 1st Judicial District, does not plan to seek re-election to another term.

Bean, who has been a judge for more than two decades, said recently he plans to step down when his current term ends in December 2014.

“I have been doing this for 20-some years,” Bean said. “It has been a fascinating career.”

Unmentioned by Judge Bean (or by the Advance, which seems to have purged Little Rascals from its memory)  is his deeply prejudicial testimony against former client Bob Kelly.

Bean and Lamb have continued to share an immunity to just consequences. (Compare the enormity of the Little Rascals prosecution with the penny-ante misconduct that typically brings about disbarment in North Carolina.)

Only their innocent victims – the Edenton Seven, the child witnesses – paid a price, and it was a high one indeed.