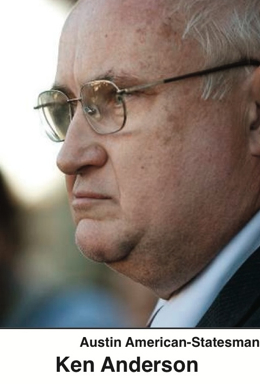 “GEORGETOWN, Texas – A former Texas prosecutor who won a conviction that sent an innocent man to prison for nearly 25 years agreed Friday to serve 10 days in jail and complete 500 hours of community service.

“Ken Anderson also will be disbarred and fined $500…. Anderson faced up to 10 years in prison if convicted of tampering with evidence in the 1987 murder trial of Michael Morton, (who) was released in 2011 after DNA evidence showed he didn’t beat his wife to death.

“Morton watched from the front row of the gallery Friday as the man who helped convict him now sat at the defense table, just as he once did. Morton smiled and was hugged by family members after the judge adjourned….

“During a weeklong Court of Inquiry earlier this year, special prosecutor Rusty Hardin presented witness testimony and other evidence to show Anderson kept evidence from Morton’s attorneys at his trial….

“Anderson said he couldn’t remember if he had evidence at the time of the trial that could have cleared Morton, but if he had had such material, he would have turned it over to the defense team.”

– From “Former Texas Prosecutor Gets Jail for Conviction that Sent Innocent Man to Prison” by the Associated Press (Nov. 8)

Even the righteous Jack McCoy withheld exculpatory evidence at least once, but of course the “Law & Order” DA was a fictional character – unlike Ken Anderson and the Little Rascals prosecutors and their unfortunate victims.