Clemency now rare; is it fear of blowback? 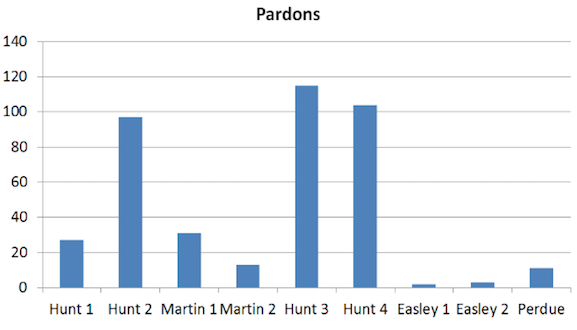 “Obviously, there’s a modern trend towards more limited use of executive clemency that extends beyond the current president. I speculate that the increased media scrutiny given to pardons and commutations has made presidents reluctant to exercise clemency…..

“The same trend… may be present in North Carolina as well…. Most of Governor Easley’s pardons were in cases in which DNA evidence exonerated the defendant, while almost all of Governor Perdue’s pardons concerned the racially tainted Wilmington 10 cases…. It is too early to tell how much, or how little, Governor McCrory will exercise executive clemency.”

– From “Do Only Turkeys Get Pardons?” by Jeff Welty at the North Carolina Criminal Law blog (Dec. 5)

The chart above, compiled by Welty, a faculty member at the University of North Carolina School of Government, depicts poignantly the odds faced by Junior Chandler and others pursuing clemency from recent North Carolina governors.

Since Jim Hunt left office in 2001, pardons have become historically scarce, paralleling the drop-off at the presidential level.  But that smattering of clemency, as Welty points out, is most like to occur in December, under cover of the Christmas spirit.