The unenlightened self-interest of prosecutors 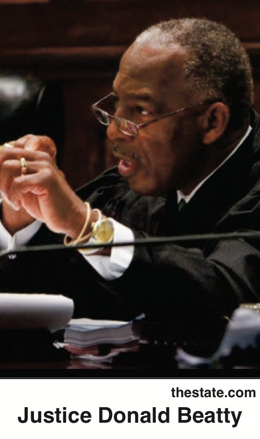 “Last year at a state solicitors’ convention in Myrtle Beach, (South Carolina State Supreme Court Justice Donald Beatty) cautioned that prosecutors in the state have been ‘getting away with too much for too long.’ He added, ‘The court will no longer overlook unethical conduct, such as witness tampering, selective and retaliatory prosecutions, perjury and suppression of evidence. You better follow the rules or we are coming after you and will make an example. The pendulum has been swinging in the wrong direction for too long and now it’s going in the other direction. Your bar licenses will be in jeopardy. We will take your license’….

“If most prosecutors are following the rules, you’d think they’d have little to fear, and in fact would want their rogue colleagues identified and sanctioned….The state’s prosecutors didn’t see it that way….

“At least 13 of the head prosecutors in the state’s 16 judicial districts, along with South Carolina Attorney General Alan Wilson, are asking for Beatty to be recused from criminal cases. This would presumably end his career as a state supreme court justice….”

– From “Judge says prosecutors should follow the law. Prosecutors revolt.” by Radley Balko in the Washington Post (March 7)

“….Decades of studies show eyewitness testimony is only right about half the time – a reality that has prompted a small vanguard of police chiefs, courts and lawmakers to toughen laws governing the handling of eyewitnesses and their accounts of crimes….

“Prosecutors, however, have opposed the efforts, arguing that the changes erode their powers, even as studies have shown that eyewitnesses are about half as likely to choose the correct suspect out of a lineup as they are to choose some combination of the innocent fillers or no suspect at all when the correct one is present. The reexamination of eyewitness testimony comes at a time when technology and other forensic analysis are being given greater weight….”

– From “Eyewitness Testimony No Longer A Gold Standard” by Nigel Duara of the Associated Press (April 19, 2014)

TV prosecutor Jack McCoy suffered his own ethical dark nights of the soul, but I can’t imagine him finding much in common with such miscreants as these.