Text of Gov. Bev Perdue’s statement on her decision to issue pardons of innocence to the Wilmington 10, as reported by WECT Wilmington.

I have spent a great deal of time over the past seven months reviewing the pardon of innocence requests of the persons collectively known as the Wilmington Ten. This topic evokes strong opinions from many North Carolinians as it hearkens back to a very difficult time in our state’s past, a period of racial tensions and violence that represents a dark chapter in North Carolina’s history. These cases generate a great deal of emotion from people who lived through these traumatic events. 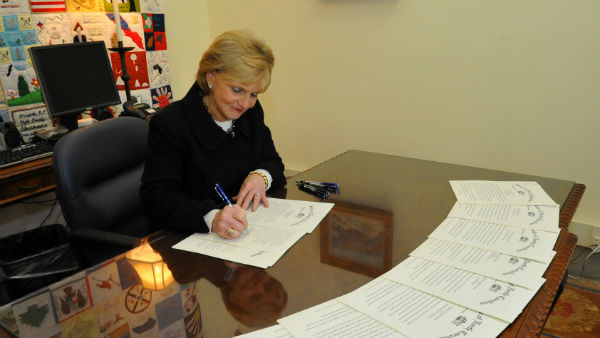 “Outgoing Governor Bev Perdue signed a Pardon of Innocence for the Wilmington 10 Monday.”

In evaluating these petitions for clemency, it is important to separate fact from rumor and innuendo. I have decided to grant these pardons because the more facts I have learned about the Wilmington Ten, the more appalled I have become about the manner in which their convictions were obtained.

In 1980, a federal appeals court overturned the convictions in a written decision that highlighted the gross improprieties that occurred during the trial. The federal court determined as a matter of law that numerous instances of prosecutorial misconduct and other constitutional violations took place. Among other things, the court ruled that with regard to the testimony of the prosecution’s key witness – upon whose credibility the case depended entirely – “the conclusion is inescapable that (he) perjured himself” and that “this fact was bound to be known to the prosecutor . . .” The court also declared that it was undisputed that key documents had repeatedly been withheld from defense lawyers. It also found numerous errors by the trial judge that had the effect of unconstitutionally prejudicing the defendants’ ability to receive a fair trial.

Since the trial ended, the prosecution’s key witness and two supporting witnesses all independently recanted their testimony incriminating the defendants. Furthermore, last month, new evidence was made available to me in the form of handwritten notes from the prosecutor who picked the jury at trial. These notes show with disturbing clarity the dominant role that racism played in jury selection. The notes reveal that certain white jurors believed to be Ku Klux Klan members were described by the prosecutor as “good” and that at least one African American juror was noted to be an “Uncle Tom type.”

This conduct is disgraceful. It is utterly incompatible with basic notions of fairness and with every ideal that North Carolina holds dear. The legitimacy of our criminal justice system hinges on it operating in a fair and equitable manner with justice being dispensed based on innocence or guilt – not based on race or other forms of prejudice. That did not happen here. Instead, these convictions were tainted by naked racism and represent an ugly stain on North Carolina’s criminal justice system that cannot be allowed to stand any longer.

Justice demands that this stain finally be removed. The process in which this case was tried was fundamentally flawed. Therefore, as Governor, I am issuing these pardons of innocence to right this longstanding wrong.

Web version of WECT’s reporting is here. A PDF of the web page is here.