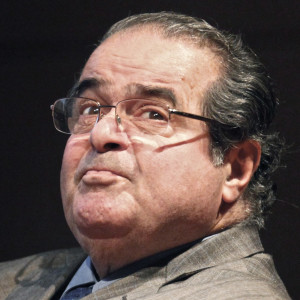 “(NYU law professor Rachel) Barkow points to Scalia’s (1990) dissent in Maryland v. Craig, where he railed against the court for permitting ‘a child witness to testify via closed circuit television in a sex abuse case,’ instead of requiring the child to testify live in the courtroom where she would be subjected to cross-examination by the defense.

“The Constitution, Scalia wrote, does not authorize judges to ‘conduct a cost-benefit analysis of clear and explicit constitutional guarantees, and then to adjust their meaning to comport with our findings.’ ”

– From “Antonin Scalia’s Other Legacy: He was often a friend of criminal defendants” by Robert Smith at Slate (Feb. 15)

“Because of (the court majority’s) subordination of explicit constitutional text to currently favored public policy, the following scene can be played out in an American courtroom for the first time in two centuries:

“A father whose young daughter has been given over to the exclusive custody of his estranged wife, or a mother whose young son has been taken into custody by the State’s child welfare department, is sentenced to prison for sexual abuse on the basis of testimony by a child the parent has not seen or spoken to for many months, and the guilty verdict is rendered without giving the parent so much as the opportunity to sit in the presence of the child, and to ask, personally or through counsel, ‘It is really not true, is it, that I – your father (or mother) whom you see before you – did these terrible things?’

“Perhaps that is a procedure today’s society desires; perhaps (though I doubt it) it is even a fair procedure; but it is assuredly not a procedure permitted by the Constitution….”

Further on, Scalia cited a 1983 prosecution in Jordan, Minn., that may have been first of the “satanic ritual abuse” wave.

“As children continued to be interviewed,” he wrote, “the list of accused citizens grew….There is no doubt that some sexual abuse took place in Jordan, but there is no reason to believe it was as widespread as charged….”