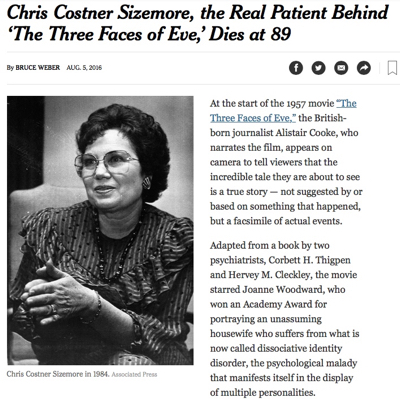 It’s appalling to see the New York Times, in its Aug. 5 obituary on Chris Costner Sizemore, “the real patient behind ‘The Three Faces of Eve’, quote as experts Dr. Colin A. Ross and Dr. Richard Kluft, psychiatrists who validated and promoted the “satanic ritual abuse” moral panic of the 1980s and early ’90s.

For decades Dr. Ross has spun out cockamamie ideas from supernatural “eye beams” to CIA conspiracies. And as recently as a 2009 interview on CBS “Sunday Morning,” Dr. Kluft confidently posited a nationwide epidemic of undiagnosed cases of “multiple personality disorder”:

Tracy Smith: So do you think that there are, what, thousands of people walking around out there with MPD who don`t even know it?

Do Ross and Kluft really provide the kind of authority the Times needed for this story?