C’mon, Dr. Kluft, aren’t you proud of your role? 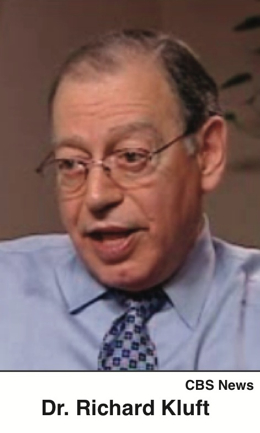 Why would Dr. Richard Kluft “take exception to” and “(raise) the issue of legal liability” over “When Psychiatry Battled the Devil”?

It’s not as if the record of Kluft’s involvement in promoting “satanic ritual abuse” and “multiple personality disorder” could be any longer or better-documented.

And it’s certainly not as if he has ever acknowledged the error of his ways.

In this exchange from a 2009 interview on CBS “Sunday Morning” he confidently posits a nationwide epidemic of undiagnosed cases of MPD:

Tracy Smith: So do you think that there are, what, thousands of people walking around out there with MPD who don`t even know it?

Passing off such fantasy as expertise would be knee-slappingly funny, of course, had it not typified the thinking that fostered scores of wrongful prosecutions and ruined thousands of lives….

I remain baffled – what exactly has Richard Kluft done to deserve such obeisance from Psychiatric Times?