California taking seriously the misconduct of its prosecutors 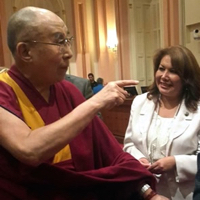 Assemblywoman Patty López with the Dalai Lama in June.

“A bill to increase criminal penalties for prosecutors who intentionally withhold or falsify evidence is headed to the [California] state Senate after being approved in committee.

“The measure by Assemblywoman Patty Lopez, D-San Fernando, would upgrade the violation from a misdemeanor to a felony for offending prosecutors. It’s already a felony for police officers to withhold or falsify evidence. The proposal provides for sentences of 16 months, two years and three years.

“The bill received the go-ahead from the Senate Appropriations Committee despite opposition from prosecution groups that say it is redundant and potentially costly.

“Opponents say that boosting the penalty for prosecutors would bog down the courts and that prosecutors already are subject to sanctions by the state Bar Association when they commit misconduct.

“Supporters argue that judges and the Bar rarely take action against offenders.”

– From “Bill boosting penalty for prosecutor misconduct gets OK” by Tony Saavedra in the Orange County Register (Aug. 11)

Is it possible that other states, such as California, aren’t as timid in disciplining prosecutors as is North Carolina?