Ever so slowly, progress made toward DAs’ accountability 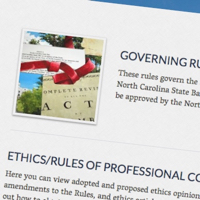 “Prosecutors should have to disclose evidence of innocence obtained after a person is convicted, a North Carolina State Bar panel agreed Wednesday.

“The ethics subcommittee voted 3-2 at a meeting in Greensboro to support the general principle that a prosecutor’s duty to disclose innocence evidence continues after a defendant is sentenced, although the members didn’t settle on specific language. A federal prosecutor and a former district attorney opposed the motion, while three attorneys in private practice supported it….

“The North Carolina Conference of District Attorneys had said in a letter to the State Bar that prosecutors say that the rule is unnecessary….

“The panel is just the first step in a lengthy process that – if the rule is approved at each step – involves the full ethics committee, public comment, the full State Bar Council and finally, the state Supreme Court.”