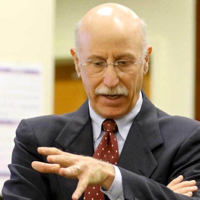 Paul J. Stern, recently retired prosecutor in Snohomish County, Wash., has long served the American Professional Society on the Abuse of Children as a board member and as an instructor on forensic interviewing.

At the least his June presentation to a large audience of APSAC conventioneers promised to be provocative: “What Practices Are We Engaging in Now That 15 Years From Now We’re Going to Look Back on and Think ‘What in the World Were We Thinking?’ ”

But the title paled in comparison with what Stern went on to say about the rap sheet of this ostensibly professional organization – its serial gullibility about “satanic ritual abuse,” “multiple personality disorder” and various other “misguided ideas.”

Click below to watch a video of Paul J. Stern’s entire talk.

He rambles, and the video suffers from not showing his accompanying PowerPoint. But the case he makes is powerful, unmistakable and surely discomfiting to audience members such as President Emeritus for Life Jon Conte and Board Member at Large Kathleen Coulborn Faller.

“I may irritate a few of you from time to time,” he noted as he began.

Some excerpts, edited for clarity:

Prosecutor Stern continued with a call for APSAC to focus on “evidence-based decision-making,” but I remained stunned by his acknowledgement of decades of APSAC’s cocky, costly wrongheadedness. Yes, innocent defendants such as Bob Kelly did indeed go to prison based on unfounded theories and corrupt interview practices.

Thank you, Mr. Stern, for your candor. Will this moment turn out to be an aberration – or is APSAC finally ready to make amends to the real victims of its “satanic ritual abuse” mythology?