‘Satanic ritual abuse’: A product of its era’s mythology 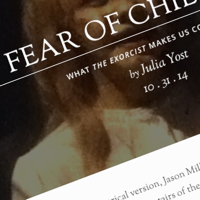 “Recall that after the 1970s there ensued a decade of moral panic over child sex abuse – including so-called satanic ritual abuse. Off-camera in The Exorcist [1973], the possessed Regan performed a Black Mass. In a film shot in the 1980s, her role in such satanic proceedings would have been quite opposite. In the mythology of that decade, the child is never a demon; the child is a victim of demons (i.e., pedophiles, satan-worshiping or not).

“Importantly, the tales of satanic ritual abuse that roiled the 1980s were nonsense, since discredited – as fantastical as any account of demonic possession. Yet they were believed, often beyond a reasonable doubt….”