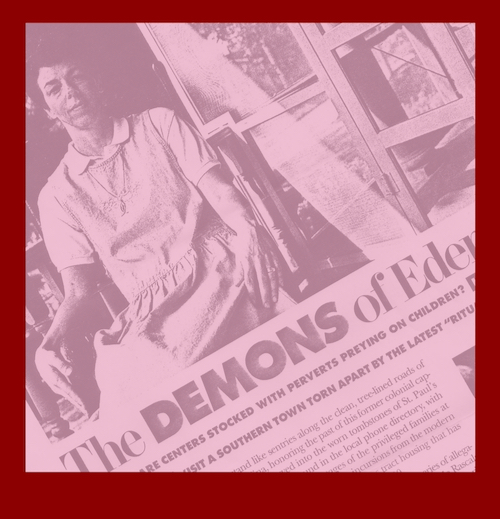 But I had somehow overlooked this response to Greensboro journalists Edward Cone and Lisa Scheer from assistant attorney general Bill Hart. It has not aged well.

I have read your recent article in Elle Magazine, “The Demons of Edenton.”

I found it interesting that you chose to leave out the fact that Chris Bean, now a District Court Judge, had initially represented Bob Kelly as his lawyer, until he found out that his son had been abused.

I also found it interesting that you chose not to include the fact that Bob Kelly’s jury had the full benefit of the experience, knowledge, and wisdom of both Maggie Bruck and William Kenner through their testimony at his trial.

I won’t use this post to address all of Hart’s claims, but….

– Chris Bean’s role in the case, far from being culpatory for Bob Kelly, actually provoked stinging criticism from the North Carolina Court of Appeals. “This boils down to the most fundamental questions of fairness,” Judge Gerald Arnold said. “When you have an attorney testifying that ‘I was Mr. Kelly’s attorney and I believed in him very strongly until I learned the truth, that is to say that he’s guilty, and then I was shattered.’ How can there be more prejudicial, stronger evidence put before a jury than to have a former attorney, the defendant’s attorney say that?” Further, Bean was among those parents whom prosecutors inappropriately but persuasively presented as de facto experts on child psychology.

– Mark Everson, UNC psychologist, was tragically influential with a “coherent package” of misconceptions he clung to long after they had been exposed by updated research. And of course there’s his jaw-dropping “where there’s smoke there’s fire” argument….

– Los Angeles psychiatrist Roland Summit, a key player in the McMartin Preschool trial, tried too late to shed responsibility for the many defendants wrongfully convicted by his “child sexual abuse syndrome” theory.

Bill Hart’s letter didn’t mention it, but I have to wonder whether this was the Elle passage that actually got under his skin most annoyingly:

“[Hart] is emotionally involved in the Little Rascals case to a startling degree. Last year he married Patricia Kephart, the mother of a Little Rascals child, who Hart had become romantically involved with during his prosecution of the case. ‘If anything it’s made it more difficult on me,’ he says of his entanglement in the investigation.”

There are huge and obvious problems with Hart’s behavior, but his “difficult” personal consequences don’t rank high on the list.