That’s our case, and we’re sticking to it (cont.) 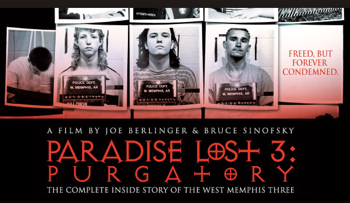 The HBO documentary “Paradise Lost 3: Purgatory”  surely deserves its Oscar nomination, although the only edge it holds over Ofra Bikel’s “Innocence Lost” trilogy of the ’90s is its happy-tears finale: the three defendants walking out of prison.

After much lawyering, the West Memphis Three in August accepted an Alford plea that allowed them to go free,  while protecting the state of Arkansas from a wrongful-imprisonment  suit and the national embarrassment of a retrial.

I had to laugh at this exchange from the ensuing press conference:

Reporter: “Will the state continue to investigate this case if additional information is brought forth, or is the case closed?”

Prosecutor Scott Ellington: “I have no reason to believe there was anyone else involved in the homicides of these three children but the three defendants who pled guilty today.”

Defense attorney Dennis Riordon: “Does anyone believe that if the state had even the slightest continuing conviction they were guilty that it would have let these men go free today?”

If H.P. Williams Jr., Nancy Lamb and Bill Hart were watching – unlikely, given the spotlight shone on unjust prosecution – no doubt they would have admired Ellington’s resolve in the face of reality.