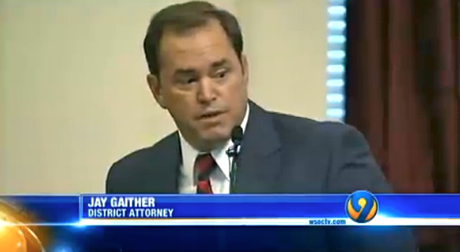 The exoneration of Willie Grimes warms my heart, and not just because the 66-year-old parolee has become “Free at last!” after a 1987 rape conviction in Hickory.

As often lamented on this site, prosecutors such as those in the Little Rascals case simply refuse to acknowledge, much less take responsibility for their mistakes.

In the Grimes case, however, District Attorney Jay Gaither told the Innocence Inquiry Commission panel, “The State cannot argue any conclusion other than for innocence in the case of Willie Grimes,” then rested the state’s case and sat down.

Afterward, he explained that “In this week’s presentation of evidence we counted no less than 35 pieces of evidence and testimony in support of innocence…. The fact that the three-judge panel was so emphatic in its conclusion and decision only strengthens the confidence I have in our decision.”

But Gaither went even further, on camera and rebroadcast by WSOC-TV: “On behalf of the district attorneys of North Carolina, I want to offer an apology to Willie Grimes.”

Gaither took the opposite approach. “You don’t just brush off 24 years of a man’s life and go on,” he told me Wednesday. “A series of events denied Mr. Grimes a fair trial. Closure was required.

“I wanted the public, as well as Mr. Grimes, to know that we weren’t just beat down, but that we were actually sorry.” (Click Gaither’s picture above to watch the broadcast that includes video of the courtroom apology.)

Also notable is how Gaither framed his apology: “I was speaking not so much for district attorneys as individuals, as for the State of North Carolina…. Only 44 of us have that right to say ‘The state says….’ ”

In this case, that right was admirably used. Would that it happened more often.