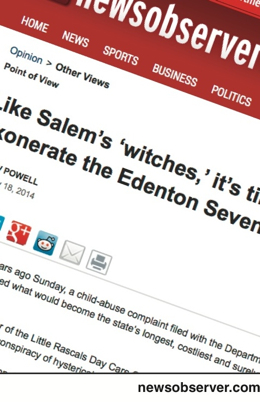 “Powell is right (in this News & Observer column). The state should exonerate those wrongly convicted members of the Edenton Seven and the wrongly accused who were never convicted but had their lives ruined.

“It can be hard, in calmer times, to imagine the power of a moral panic like the one in Edenton, itself part of a broader national hysteria. Lisa (Scheer) and I wrote about the case (in Elle magazine) and in our reporting found a community where rational people seemed afraid to dissent from the fantastical narrative.

“As young parents ourselves we were sympathetic to the families we met, but clearly things had gone very wrong in Chowan County.”

And three online responses from the N&O:

“A few months after (Bob) Kelly’s release I met him briefly. He had a job maintaining pay phones (for Glenn Lancaster), one of which was located in a pizzeria I was managing.

“I asked him if he was indeed who I thought he was and he said yes. When I told him I believed him and considered the accusations against him ridiculous on their face, he thanked me and appeared to be grateful for the moral support. What struck me was the lowly financial state he seemed to be reduced to and the humiliation he so clearly had to endure.”

“Mr. Powell has forgotten Dorothy Rabinowitz, the Wall Street Journal journalist/commentator who received one of her numerous Pulitzer nominations for a series on the Edenton witch hunts. Those articles were some of the most powerful and insightful I have read in my life. I recall wondering why no North Carolina newspaper had the guts to stand up and condemn the witch trial hysteria and obvious travesty of justice taking place right in their own back yard.”

Rabinowitz reported heroically on the ritual abuse epidemic, but she focused mostly on cases in Maplewood, N.J.; Malden, Mass., and Wenatchee, Wash., rather than in Edenton.

“I am so glad to know that you were in Edenton at that time and you know exactly what happened. Do you really think a child molester is doing to admit what they did? I don’t think so!!!

“I’m sure you will allow them to baby sit your children or grandchildren.”

Actually, I’d be glad to allow that – what potential babysitter has ever been more thoroughly vetted than the Edenton Seven?