Portrait of a town haunted by hindsight 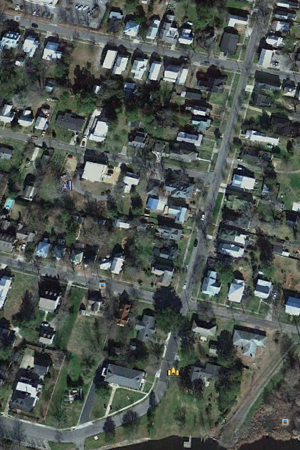 “(The Little Rascals Day Care center) is red brick, with plate glass windows on the front. The two-story structure is located on East Eden Street, amid mostly modest one-family homes, oaks, azaleas and crape myrtles, just a few blocks from the beautiful bay and downtown.

“The neighborhood is quiet now, but as the case unfolded during the last two years, journalists from time to time set upon the area, seeking eyewitnesses to the alleged incidents. Several residents recently told a visitor they had seen none of the alleged acts.

“For some, hindsight is powerful in the wake of the allegations. Lenora Smith, who lives next door to the center, voiced ‘surprise’ at the charges but does remember that ‘a few things I saw were kind of unusual.’

“Well, Robert Kelly owned a plumbing business, but ‘at times he stayed over there (at the day-care center) a lot,’ she said….

“Some people here admit to being a bit jumpy since the allegations surfaced.

“Debbie Jones said, ‘I get paranoid.’ Extending her hand, palm down, she made it tremble, saying: ‘I’m like this if I’m with my kids in a public place.’

“In a building on the town’s main thoroughfare, South Broad Street, a young boy who looked about 5 years old, bolstered her point. As he walked out of an office into a hall, apparently heading for the bathroom, he looked over his shoulder and said stoically to a woman: ‘If I don’t come back, call the police.’”

– From “Child Abuse Charges at Day-Care Center Divide Formerly Close-Knit Community” by Lee May in the Los Angeles Times (June 8, 1991)