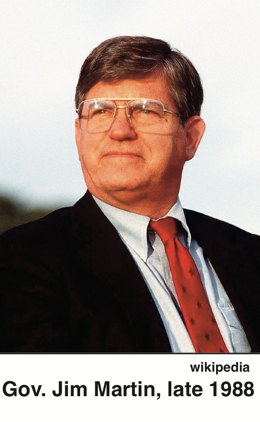 “Thank you for your letter expressing your concerns about the prosecution of the Little Rascals Day Care Center personnel in Chowan County. Although this matter is outside my jurisdiction as head of the executive branch, I appreciate your interest in the administration of justice in North Carolina….

“I would suggest that it might be appropriate to wait until after the trial when all the evidence has been heard before reaching conclusions about the correctness of actions taken by (District Attorney H.P. Williams) and the court.

“North Carolina has had a long history of evenhandedness in the administration of justice, and I am confident that the tradition continues to be in effect. Nonetheless, if you wish to express your concerns directly to the District Attorney, his address is…..”

– From Gov. Jim Martin’s response to PBS viewers appalled by the first installment of “Innocence Lost” (May 7, 1991)

Last week I found in the State Archives in Raleigh about a dozen letters beseeching Gov. Martin to look into the case. Although significantly less heated than those addressing the mayor of Edenton, the letters expressed alarm about the plight of the Edenton Seven:

“As a member of Amnesty International, I write letters to officials of foreign governments, many of them without democratic governments or traditions, urging them to look into the cases of people being unjustly treated…. (In Edenton) one fact cannot be ignored: Defendants have been held in jail without a trial for close to two years….”

“I was disturbed by the incredibly high bonds recommended by the District Attorney and allowed by the Judge…. I would hope that you will personally intervene to request judicial review of the bonds set….”

“As a former teacher, I can assure you that children – especially young children – can easily be coaxed, cajoled or pressured into say just about anything an adult might wish them to say.”

I have asked Gov. Martin, now retired and living at Lake Norman, to discuss his views of the Little Rascals case both then and now. I’ll be posting his response soon.