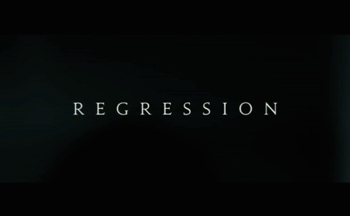 “In (the upcoming movie) Regression, Ethan Hawke plays a detective investigating accusations by a woman against her father. There’s a twist: The father has admitted wrongdoing, though he has no recollection of what happened – and a psychologist is summoned to help him recover his memories….

“The trailer is opaque in its rendering of what crime the father may have committed, but it’s probably meant to echo the Satanic witch hunts that gripped parts of America in the 1980s and early ’90s….  The daughter’s haunting memories include ‘chanting,’ ‘robes’ and a ‘black mask’….

“So it’ll be interesting to see (director Alejandro) Amenábar’s take in Regression: Does he present the case as a real, Satanic experience that actually occurs within the world of the story, or will the film be a larger commentary on the horrific fallout of unfounded hysteria?

“Here’s hoping it’s the latter…. We’ll find out when Regression opens in August.”

Also arriving in August – but much less ambiguously: “We Believe The Children: A Moral Panic in the 1980s” by Richard Beck. According to a starred review in Publishers Weekly, “Beck marshals extensive research into an absorbing dissection of a panic whose tremors still affect us today.”