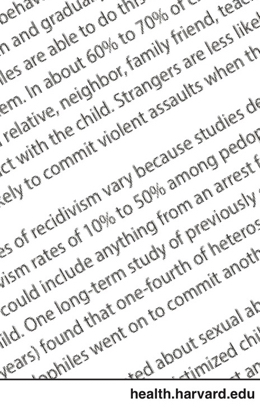 “Pedophilia, the sexual attraction to children who have not yet reached puberty, remains a vexing challenge for clinicians and public officials…. Researchers have found no effective treatment. Like other sexual orientations, pedophilia is unlikely to change….

“Estimates of recidivism vary…. One long-term study of previously convicted pedophiles (with an average follow-up of 25 years) found that one-fourth of heterosexual pedophiles and one-half of homosexual or bisexual pedophiles went on to commit another sexual offense against children….”

– From “Pessimism about pedophilia” in the Harvard Mental Health Letter (July 1, 2010)

As far as I’ve been able to tell, not a single one of the defendants in the Little Rascals, McMartin, Fells Acres, Wee Care, etc., cases has been accused of later sexual offenses – or had been accused of earlier offenses. How could the serial perpetrators of such outrageous crimes have avoided recidivism?

Footnote: The Harvard researchers also noted that “Nearly all people with pedophilic tendencies are male. Studies of child molesters have reported that only 1 percent to 6 percent of perpetrators are female”…. Wonder how the Little Rascals prosecutors explained to themselves how no fewer than five of their seven defendants happened to be women?