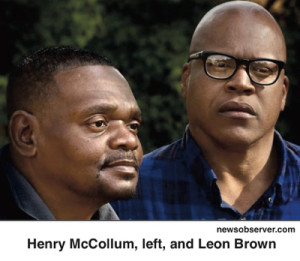 “Significant criminal justice reforms (are needed) to minimize the chances of wrongful prosecution in the future.

“Some might dismiss such goals as a liberal utopian ideal, but criminal justice reform is being embraced nationwide by tea party conservatives. Why? Because few things exemplify the overreach of an all-too-powerful government (better) than one that yanks away an individual’s freedom without legal justification….

“Conservatives in the heavily Republican Texas legislature have embraced some of the most far-reaching criminal justice reforms in the country….”

– From “Shame and joy behind 149 exonerations” in the St. Louis Post-Dispatch (Feb. 7 editorial)

And how is North Carolina’s own heavily Republican legislature taking up the cause of criminal justice reform? With the piously labeled Restoring Proper Justice Act, (text cache), which both conceals information on the drugs used for capital punishment and repeals a law requiring a physician be present.  Sponsoring Rep. Leo Daughtry railed against “roadblocks in front of the death penalty (that) have stopped us from using the punishment” for the past decade.

Had Daughtry had his way, death row inmates Henry McCollum and Leon Brown would long since have been executed – instead of exonerated and then pardoned by the same governor who blithely signed the Restoring Proper Justice Act into law.