Better not to be wrongfully convicted in the first place 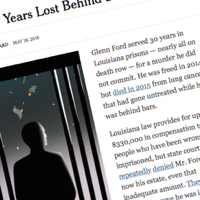 Even where (wrongful imprisonment) compensation laws exist, they can be badly flawed. Most states, like Louisiana, place the burden on people who were wrongly convicted to prove their innocence before any payment is made. Several states offer embarrassingly small payouts…. Others have laws riddled with unreasonable restrictions…. Some refuse to pay anyone who pleaded guilty or who confessed to a crime he or she did not commit, despite evidence that many innocent people do both….”

– From “Paying for Years Lost Behind Bars,” editorial in the New York Times (May 18)

And some states – well, actually, just one – have governors who withhold compensation for nine months while gratuitously reinvestigating a DNA exoneration.

"How could the mental health profession have had such a catastrophic misadventure?"
And to have been so eager to forget it? ... See MoreSee Less

Opinion | The Forgotten Lessons of the Recovered Memory Movement

A deep understanding of how cultural trends and psychology interact is more important than ever.
View Comments

ALEXI MOSTROUS: The school seemed a cosy home-from-home, perfect for nurturing young children. But, bizarrely, it was to become the centre of a sinister conspiracy theory.
View Comments