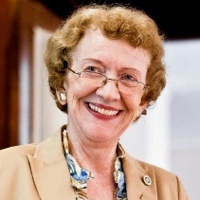 “Connell School of Nursing Professor Ann Wolbert Burgess, a pioneer in the field of forensic nursing and an internationally recognized leader in the treatment of victims of trauma and abuse, has been designated a ‘Living Legend’ by the American Academy of Nursing, the academy’s highest honor.

“Burgess is being recognized this year for multiple contributions to the nursing profession and society. [Her] research and books cover topics such as serial killers and rapists, kidnapping, sexual victimization and exploitation of children, cyber crimes, sexual abuse, and elder abuse….”

Yet again, a key fomenter of the “satanic ritual abuse” day care panic takes a career achievement bow, plowing unapologetically past the wrecked lives of the wrongfully prosecuted.

Here’s how Debbie Nathan and Michael Snedeker described Burgess in 2001 in “Satan’s Silence: Ritual Abuse and the Making of a  Modern American Witch Hunt”: “promoter of the use of children’s drawings to diagnose sexual abuse, developer of the idea of the sex ring, participant in developing the case that imprisoned the Amirault family and currently a researcher into the traumatic aftereffects of ritual abuse.”

Most grievous for the Little Rascals defendants, it was Ann Wolbert Burgess who led a three-day conference in Kill Devil Hills  just months before Bob Kelly’s arrest. The agenda: learning how to spot child molesters operating day-care facilities.

I’ve asked Professor Burgess to look back at her role in Little Rascals. No response – maybe she intends to bring it up in her acceptance speech.