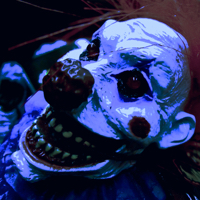 “Police say they are doing extra patrols in a Winston-Salem neighborhood after two children reported seeing a clown trying to lure kids into the woods with treats…. and one adult reported hearing the clown.

“Officers say they found no evidence of a clown in the woods.

“About four hours later, a caller who refused to give a name reported seeing a clown about 2 miles away. Police say again they found no evidence of a clown.

“Several unverified clown sightings in northern South Carolina have been in the news recently.”

– From “Winston-Salem police increase patrols after clown sightings” in the News & Observer (Sept. 5)

“The rumor has traveled like a Halloween ghost – from Wilson to Coats to Apex to Raleigh.

“Perplexed law enforcement agencies statewide have been fielding inquiries for weeks about stubborn – but unfounded – rumors of a plan by unidentified Satan worshipers to kidnap and sacrifice children….between the ages of 2 and 5 for a human sacrifice on Halloween.

– From “Rumors of satanists kidnapping children are tough to snuff out” in the News & Observer (Oct. 28, 1989)

What fertile ground North Carolina, circa 1989, provided for hysteria about 2- to 5-year-olds. The sheriff of Johnston County seems to have summoned considerably more skepticism about farfetched rumors than the Little Rascals prosecutors. Within three months of the Halloween panic all of the Edenton Seven had been arrested.

What sequela might we expect from the Great Clown Panic of 2016? Prosecutors, line up your child witnesses!