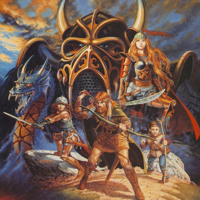 “Strange what we worry about when it comes to our children. A great deal of the culture-war politics of the 1980s consisted of theatrical wailing about threats to our children that were either entirely made up or wildly exaggerated: The boys in ‘Stranger Things’ love to play Dungeons & Dragons, and, in a rare oversight, the series does not even touch on the minor cultural panic surrounding that game in places such as small-town Indiana, where D&D’s supernatural elements sparked terrified tales of occult experimentation.

“It’s not for nothing that this came around the same time as the Salem-style mass hysteria over ‘Satanic ritual abuse’ at the nation’s child-care centers, with fanciful worries about Luciferian cults obscuring the more straightforward anxiety associated with abandoning one’s children to child-care facilities. Yesterday’s Satanic cultists and Alar [a controversial apple growth inhibitor] are today’s online predators and brain-scrambling vaccinations….”