Transgender movement compared to hysterias of 1980s and ’90s 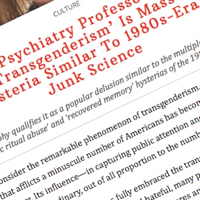 “Transgenderism would refute the natural laws of biology and transmute human nature. The movement’s philosophical foundation qualifies it as a popular delusion similar to the multiple-personality craze, and the widespread ‘satanic ritual abuse’ and ‘recovered memory’ hysterias of the 1980s and ’90s. These last two involved bizarre accusations of child abuse and resulted in the prosecution and ruined lives of the falsely accused.

“Such popular delusions are characterized by a false belief unsupported by any scientific or empirical evidence and have a contagious quality that overrides rational thinking and even common sense. …”

– From “Psychiatry Professor: ‘Transgenderism’ Is Mass Hysteria Similar To 1980s-Era Junk Science” by Richard B. Corradi at the Federalist (Nov. 17)

Dr. Corradi is professor emeritus of psychiatry at Case Western Reserve School of Medicine, where his opinion of transgenderism is “in no manner shared by this department or by Case Western Reserve or… the American Psychiatric Association or mainstream psychiatry.”  A more widely accepted view: “You would think that a professor of psychiatry would know better” by David Cary Hart at the Slowly Boiled Frog (Nov. 18)

But what you won’t see debated among 21st Century psychiatrists and social scientists is Corradi’s characterization of  “satanic ritual abuse” as “a popular delusion.” Perhaps one day the American Professional Society on the Abuse of Children will decide to join them.