Another bumper harvest for National Registry of Exonerations 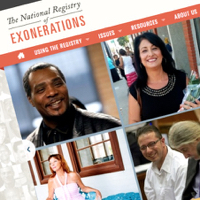 “America saw another record year for the number of prisoners being exonerated, according to the National Registry of Exonerations, a project of University of California Irvine Newkirk Center for Science & Society, University of Michigan Law School, and Michigan State University College of Law.

“For 2016, 166 people were exonerated of crimes and released from prison, 52 of them for murder. Of all the exonerations, 70 cases involved official misconduct of some sort, and in 74 of the cases, convictions came from guilty pleas. And in 94 cases (also a record) it turned out that no actual crime occurred at all. These were mostly drug cases but also some child sex abuse cases. Most famously, the San Antonio Four, four women convicted in 1998 in a fabricated satanic child sex abuse ring scandal, were released in 2016 after it finally became clear the crimes never occurred.”

Of the Edenton Seven, only Bob Kelly and Dawn Wilson, whose convictions were overturned, qualify for the National Registry of Exonerations. As spokesman Ted Koehler told me five years ago, “The Edenton case was a terrible witch hunt. Regretfully, though, [Betsy] Kelly’s and [Scott] Privott’s guilty pleas and the dropped charges against [Robin] Byrum, [Shelley] Stone, and [Darlene] Harris do not fit our definition of an exoneration….”