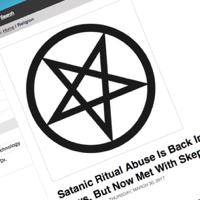 “Beginning with the McMartin preschool case in 1984… much of the media accepted without question fantastic claims brought by police, parents and prosecutors. But by the early 1990s when the courts began tossing out convictions based on recovered memories, coached testimony, and magical thinking, the media backed away….

“Two stories in the U.S. and British press have resurrected SRA: Pizzagate and abuse claims lodged against deceased British Prime Minister Edward Heath. However, this time round these stories are being treated with skepticism ….

“Abuse is a serious enough crime without having the false and inflammatory adjective of ‘satanic’ appended to it. I am glad to see The Sun and Mail on Sunday are treating this aspect of the claims as being ridiculous….”

– From “Satanic Ritual Abuse Is Back In The News, But Now Met With Skepticism” by George Conger at the Media Project (March 30)