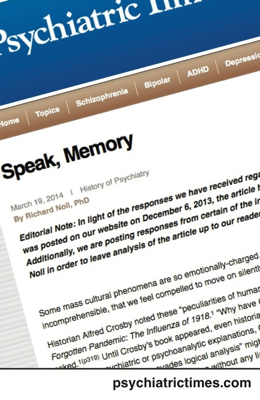 “Editorial Note: In light of the responses we have received regarding this article by Richard Noll, PhD, that was posted on our website on December 6, 2013, the article has been reposted with a modification. Additionally, we are posting responses from certain of the individuals mentioned in the article and from Dr. Noll in order to leave analysis of the article up to our readers.”

As pointed out at 1 boring old man, PT’s belated reposting omits this passage:

“New (American Psychiatric Association) work groups for the preparation of DSM-IV were formed. Not surprisingly, none of the former members of the DSM-III-R Advisory Committee on Dissociate Disorders was invited to be on the work group for the dissociative disorders.”

Prominent among those uninvitees, of course, were Dr. Richard Kluft and Dr. Bennett Braun, both of whom broke their silence to accept PT’s offer of space to swat back at Noll. Also responding: Dr. David Spiegel, recently described as “the most influential man responsible” for the inclusion of DID/MPD in DSM-V.

And now Noll has gently rebutted – for the most part, refuted – the SRA apologists’ noisy rebuttals.

It’s been 25 years since the fever-breaking Chicago conference – plus another three months while Psychiatric Times searched its soul and its appetite for litigation. Does the vigorous exchange on the PT site mark the beginning of psychiatry’s overdue reexamination of its SRA era?

If so, that discussion must address not only the causes of the moral panic but also its effects: that is, the wrongful and brutal prosecution of hundreds of innocent defendants such as the Edenton Seven – a subject Kluft, Braun and Spiegel managed to mention not at all in their responses. Are they really so oblivious?