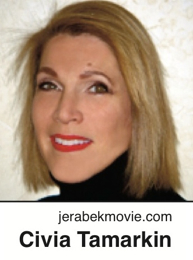 Among those journalists who fell for the “satanic ritual abuse” storyline, none fell harder than Civia Tamarkin.

She not only stage-managed an embarrassingly credulous episode of “Nightline,” but also testified earnestly at a Believe the Children convention alongside Little Rascals prosecutor H. P. Williams Jr. and supposed ritual-abuse survivor Laura Buchanan (““ was told that a surveillance device would be inserted into my brain….”).

In 1993 Tamarkin delivered a lengthy address on “Investigative Issues in Ritual Abuse Cases” to the Fifth Eastern Regional Conference on Abuse and Multiple Personality in Alexandria, Va.

Like Ross Cheit two decades later, she had no trouble detailing numerous flaws in the prosecution of McMartin and other ritual abuse cases but inevitably came up frustrated in her search for a smoking gun or two.  Most striking, after recounting all her journalistic fault-finding, was her unquestioning gratitude to SRA snake-oil theoreticians Roland Summit and Bennett Braun for “(taking) the time to teach me what they could.”

Prior to her affiliation with Believe the Children, Tamarkin had reported commendably for Time, People and the Chicago Sun-Times and had coauthored a book with Chicago educator Marva Collins.

More recently, she has directed a documentary on the aftermath of a soldier’s death in Iraq….

So what happened in the 1990s? How did an experienced reporter lose her skepticism in the face of “ritual abuse” claims?

I’ve asked Tamarkin what she was thinking then – and what she believes today – but haven’t received a response.