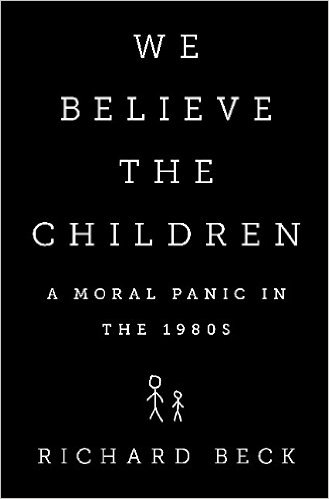 Since I undertook this blog in 2011, I’ve been waiting for a mass-market book that recalls the “satanic ritual abuse” day-care era with authority, insight and thoroughness.

“We Believe the Children: A Moral Panic in the 1980s” comes pretty darn close to meeting that standard. (I do wish author Richard Beck had addressed the significant post-panic contributions of Richard Noll and Allen Frances.)

I’ll be posting excerpts from the book and later an interview with Beck.

Meanwhile, I’ve been pleased to see the reviews in the news media – so far, all largely appreciative.

“…This book does a devil of a job correcting… all the lies and self-deceptions, so credulously believed in the 1980s….”

– From “Child Abuse Cases Endure as Lessons in Hysteria” by Mark Oppenheimer in The New York Times (Aug. 6)

“ ‘We Believe the Children’ should serve to remind us of the dangers of the ‘we must believe the victim’ mindset in the case of any criminal offense. A faith-based pursuit of justice can lead to a miscarriage of justice.”

– From  “What Fueled the Child Sex Abuse Scandal That Never Was?” by Lizzie Crocker at the Daily Beast (Aug. 3)

“ ‘We Believe the Children’ reveals the various combinations of ignorance, venality, arrogance and zealotry that characterized the major players who fueled the moral panic.”

– From “A Very Model Moral Panic” by Carol Tavris in the Wall Street Journal  (Aug. 7)

Here also is a radio interview with Beck and – inevitably – a response from witch-hunt denier Ross Cheit.