‘Most people thought I had lost my damn mind’ 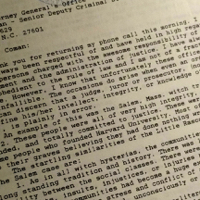 Portion of Dee Swain’s Jan. 12, 1993 letter to Attorney General’s Office on “the startling similarities of the Little Rascals case and the Salem” witch trials of 1692-93.

At a time when the Little Rascals claims were exposing widespread gullibility, a gritty band of doubters – e.g., Raymond Lawrence, Glenn Lancaster, Jane Duffield, Doug Wiik, Susan Corbett and Dee Swain – was desperately working to keep the defendants from being crushed by public opinion and prosecutorial coercion.

As treasurer for the Committee to Support the Edenton Seven, Swain distributed donations to defendants, facilitated the lowering of Scott Privott’s exorbitant bond and wrote an epic four-page (single-spaced!) letter educating the attorney general’s office on the errors of its ways.

How was it that a propane dealer in Washington, N.C., could see through the fog that engulfed so many professionals?

“It was obvious to me right away that it was hysteria,” he says. “I didn’t get involved until after (Bob Kelly’s) conviction – I had thought surely the jury would see through it….

“I’ve always been a skeptical person, someone who stands outside the box…. Most people thought I had lost my damn mind, defending ‘child molesters’…. I got anonymous phone calls….”

Swain is surprisingly generous to those who bought into the “satanic ritual abuse” stories elicited by prosecution therapists: “There aren’t any villains. They all acted in good faith. They were on a mission. They were going to be heroes….. You could see it all in ‘Extraordinary Popular Delusions and the Madness of Crowds’ (by Charles Mackay, 1841).”

And why does he think none have stepped forward a quarter century later to recant? “What they did was too terrible to admit to themselves.”