‘There are no profiles in courage out there’ 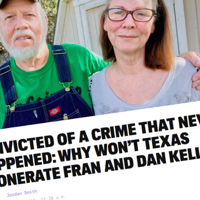 “Prosecutors wield extraordinary, unparalleled, and unchecked power. ‘They alone decide who to prosecute for criminal offenses, what charges to bring against them, and what punishments to seek,’ as the National Registry (of Wrongful Convictions) says. ‘In practice, that power extends to convicted defendants as well. If a sitting prosecutor asks the appropriate court to vacate the judgment and dismiss the charges against a defendant … it will happen.’

“But this requires political will. And too often, the will is not there. As (Keith Hampton, attorney for Fran and Dan Keller) notes, convincing a prosecutor that an injustice has happened can be a tough pull: ‘Unless you have DNA – unless you get the DA completely cornered – there are no profiles in courage out there,’ he says.

“Still, the number of exonerations in cases where no crime was actually committed are on the rise – so at least in some jurisdictions, individuals aren’t forever left in the kind of limbo in which the Kellers find themselves. The National Registry includes 540 exonerations in no-crime cases, including 51 exonerations in child sex abuse ‘hysteria’ cases (including Bob Kelly and Dawn Wilson)….”

– From “Convicted of a Crime That Never Happened: Why Won’t Texas Exonerate Fran and Dan Keller?” by Jordan Smith at the Intercept (April 8)