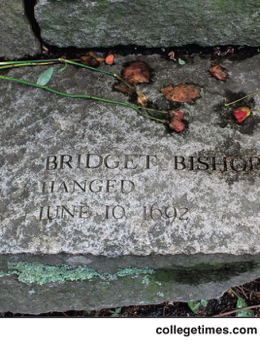 “Historical truths emerge only with time, after which they are ours, particularly on Halloween, to mangle.

“Early on, the Salem witch trials disappeared from the record; a hush descended over 1692 for generations. ‘The People of Salem Do Not Like to Be Questioned in Regard to the Witchery Affair’ reads a Philadelphia Inquirer headline – from 1895. It fell to others to resurrect the ‘witchcraft,’ as the South did during the debate over slavery. Then came Arthur Miller, who made off with the story, or at least a version of it.

“A lush mythology grew up around the trials, one that reassured us that these events took place in a remote land in no way resembling our own. In truth, they are deeply woven into the American fabric. They are more relevant than the lore suggests – our earliest instance of conspiratorial fantasy and reckless demonizing, of the brand of national distemper that grips us in anxious times.”

– From “Five Myths about the Salem witch trials” by Stacy Schiff in the Washington Post (Oct. 30)