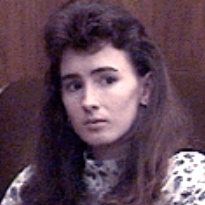 Robin Byrum, not long out of high school and pregnant with her first child, went to work at Little Rascals Day Care Center in September 1988. A year later she was in prison under $500,000 bond, charged with 23 counts of child sex abuse. Prosecutors had no credible evidence against her, but they were betting the youngest defendant would implicate Bob Kelly and the others accused.

“I was in the wrong place at the wrong time,” she recalls today in her first interview since charges finally were dropped against her in 1996. “They thought I would tell on the others. That was the only reason I was swept up.”

Now 15 years into her second marriage, she lives in Eastern North Carolina. For her privacy I’m not mentioning her town or married name. “I’ve gone on with my life. It’s turned out well, in spite of all that….”

After months of sporadic questioning she was arrested in January 1990.  “Three men from the SBI came to my mother’s house. It was so frightening. They intimidated me. One of them put his foot up on the table and I could see the gun in his ankle holster. He said, ‘I’d hate to see you taken away from that child.’

“Then we went to the police station in Edenton. [SBI agent] Kevin McGinnis said he would give me one more chance to talk. I could hear my baby crying in the next room. When I told him again I didn’t know anything, he was so angry he kicked the desk across the room.”

Along with Betsy Kelly and Dawn Wilson, she was put in a cell in women’s prison in Raleigh. “I was three hours from my only family in North Carolina. Strip-searched before and after every visit.

“They put another prisoner in there with us, a snitch, thinking she could get us to talk. But we had nothing to tell….. One day they even tossed our cell, looking for ‘satanic’ passages marked in our Bibles.”

As the months passed, prosecutors offered Byrum ever more tempting plea deals. In a particularly poignant moment in “Innocence Lost: The Plea” (1997) she explains to Ofra Bikel why she had even turned down a deal offering no active time, but an admission of guilt: “‘That would mean knowing I would not ever have to be separated from my child again. But then I’d have to live with the rest of my life that I [said I] did something when I didn’t do it.’”

In 1990, bond was reduced to a still absurd $200,000 and her grandparents and two aunts in Kentucky managed to pay in time to get her home for Christmas.

Today Byrum, 46, works in health information management. “My office manager knew about the case, but the doctors hadn’t put two and two together until they went to your site. One of them shook his head and said, ‘How did seven people go to prison on something completely unfounded?’ Well, I’m still baffled too….

“How could anyone believe all these things happened? We were a block from downtown, in a building with huge windows and no curtains. Parents walked their 2- and 3-year-olds there, and they dropped by all the time….

“Didn’t a light bulb ever once come on that made somebody use their common sense?”